Fig. (1). 65-year-old male with end stage renal disease and a left forearm radio-cephalic arteriovenous fistula with enlarging aneurysms close to the arterial anastomosis, which were being frequently cannulated for dialysis (puncture sites marked by red circles). Click image to enlarge. 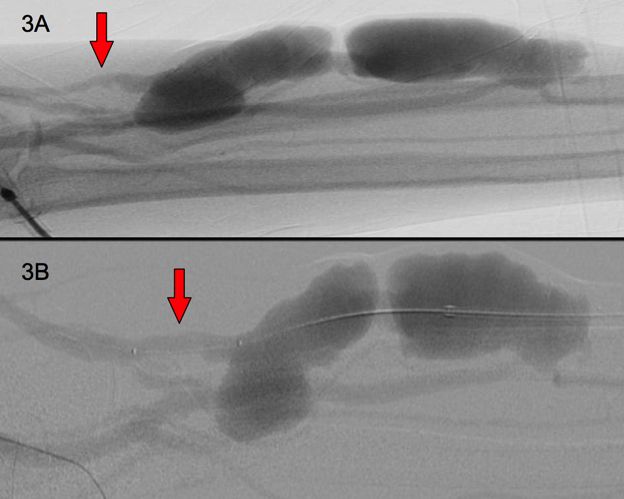 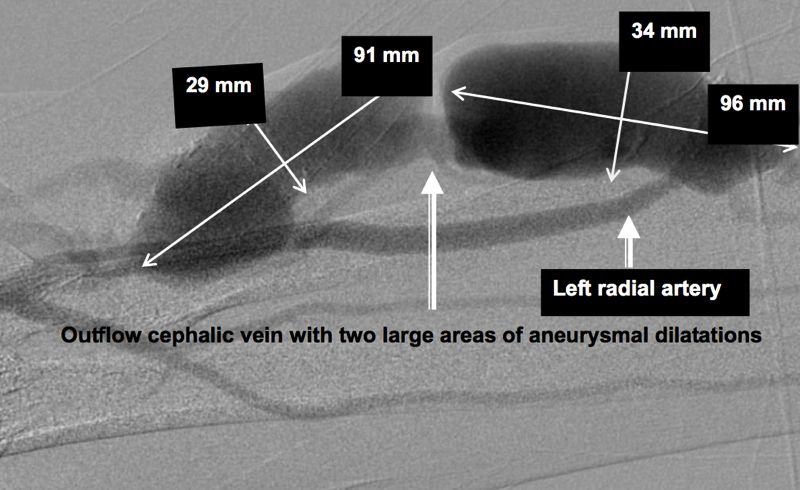 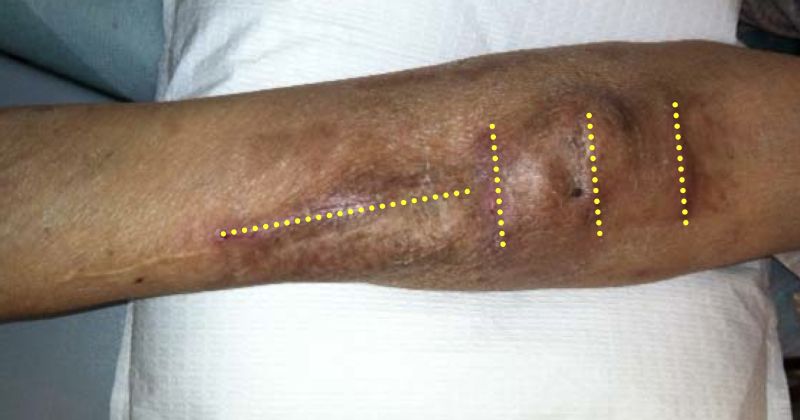 Fig. (4). Four separate incisions were made in the left forearm (marked by dotted lines). The aneurysmal sac was resected and the cephalic vein was over sewn in a longitudinal fashion leaving adequate caliber lumen for cannulation during hemodialysis. Click image to enlarge.

A 65-year-old Asian with history of polycystic kidney disease, hypertension, secondary hyperparathyroidism and end stage renal disease (ESRD) was referred to the interventional nephrologist for high venous pressures during dialysis.

He had been receiving dialysis through a left forearm AV fistula created 15-years ago. The examination of the AV fistula, revealed two large areas of aneurysmal dilatations close to the arterial anastomosis (Figs. 1, 2). The aneurysmal areas were frequently being cannulated for dialysis given the “lack of cannulation sites”. No prior fistulogram was available for comparison. The left forearm fistulogram (with brachial artery cannulation) demonstrated two aneurysmal areas in the outflow cephalic vein close to the AV anastomosis. Additionally, there was 70% stenosis of the outflow vein, 1-cm proximal to the proximal aneurysmal dilatation, which was successfully treated with percutaneous angioplasty for short term benefits (Fig. 3). In view of the large aneurysmal dilatation and lack of suitable additional segment for cannulation, he was referred for a surgical revision. He underwent resection of the aneurysmal sac, along with luminal reconstruction of the outflow cephalic vein (Fig. 4). However, given the lack of adequate cannulation segment, a short term tunneled central venous catheter was placed during the post surgical recovery period.

Arteriovenous fistula is considered the “ideal vascular access” in patients with end stage renal disease (ESRD); however, its creation is not without complications. Aneurysmal dilatation is a poorly defined complication which, can potentially lead to access loss and life threatening hemorrhage. Increased venous pressure due to proximal venous stenosis along with repeated cannulations at the same site, are thought to play a significant role in pathogenesis. Given risk of substantial bleeding, it is recommended to avoid cannulation of aneurysmal area; however, as seen in our patient significant numbers of ESRD patients are at risk of being cannulated in the aneurysmal area. Nephrologist taking care of ESRD patients should be aware of its wide clinical spectrum along with signs of “unstable aneurysms” that would mandate an emergent surgical referral. Fistulogram often identifies a high grade proximal stenosis which can be treated by percutaneous angioplasty and perhaps halt the aneurysm progression. Although, endovascular interventions with stent graft placement can be considered in those with pseudoaneurysms related to arteriovenous grafts, it is often an interim measure in an attempt to prolong access longevity. With new surgical techniques and enhanced expertise, it is now possible to salvage the current AV access while simultaneously preserving the precious venous capital for the future AV accesses.

The author confirms that this article content has no conflict of interest.