Hand Pain with Dialysis Access: Is it Always Steal Syndrome? 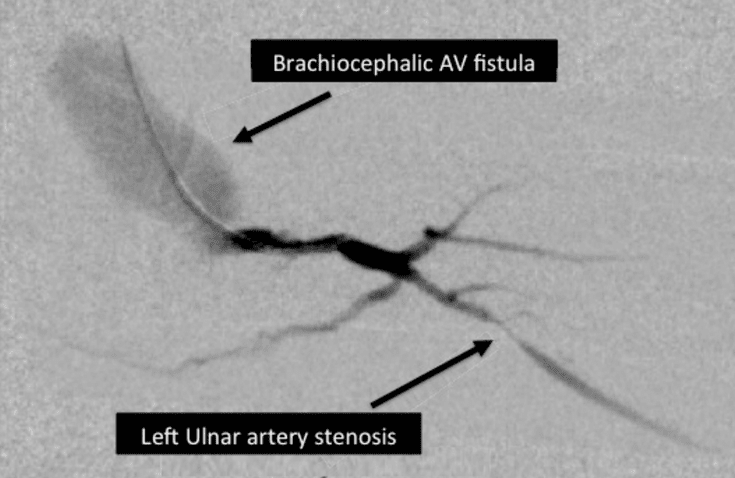 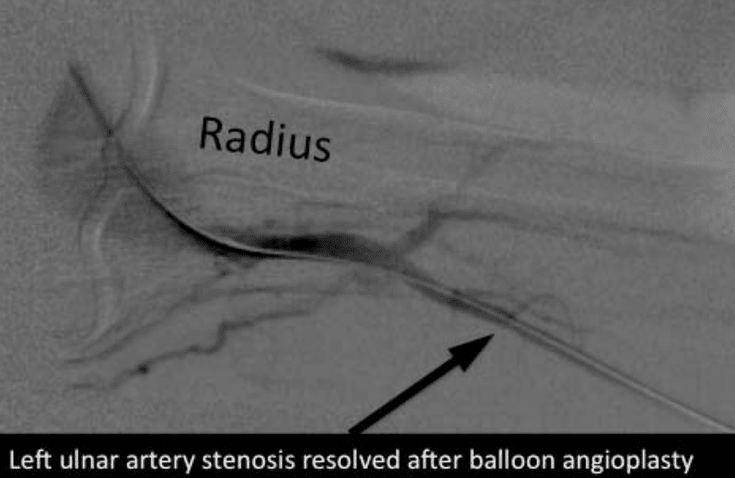 Hand pain secondary to ischemia is encountered in about 1-8% of the hemodialysis population. The common presenting symptoms are cold and numb fingers, blue discoloration and tissue necrosis. These symptoms are frequently associated with proximal arteriovenous accesses and are often pronounced during hemodialysis treatment.Distal extremity ischemia secondary to steal phenomenon is often considered as the underlying pathophysiologic mechanism.

We report a 56-year-old male with history of diabetes,hypertension and end stage renal disease (ESRD) receiving hemodialysis via a 3-year old mature left upper arm brachiocephalic arteriovenous fistula (AVF). He presented with new onset pain and numbness of the left hand of 3-week duration. The pain and numbness was limited to the medial three fingers and medial aspect of hand. Examination revealed an unremarkable well-developed upper arm AVF. The radial pulse was preserved. The capillary filling of medial three fingers was sluggish. The skin over the fingers was intact and without any necrotic ulcers.

A fistulogram revealed an unremarkable AVF without any evidence of stenosis. An arteriogram revealed a normal caliber axillary and brachial artery with preserved flow in the radial and interosseous arteries. However the ulnar artery was not adequately visualized. A selective arteriogram confirmed the presence of flow limiting stenosis in the proximal ulnar artery, which was successfully dilated (Figs.1, 2). The symptoms resolved within 24 hours following angioplasty.

The author confirms that this article content has no conflict of interest.