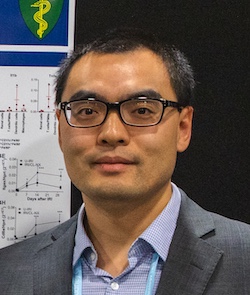 This conclusion followed a hypothesis that incomplete repair after acute kidney injury (AKI) can lead to progressive fibrosis and development of chronic kidney disease (CKD). The poster authors have previously shown that unilateral ischemia-reperfusion kidney injury with contralateral nephrectomy (IRI/CL-NX) results in significantly less fibrosis in the injured kidney than does unilateral IRI with the contralateral kidney intact (U-IRI). That led to investigating the mechanism of this difference by comparing an identical time of ischemic injury between mice subjected to U-IRI and those subjected to IRI/CL-NX.

Analysis results revealed that initial recruitment and activation of macrophages, dendritic cells, and T cells, as well as myofibroblast activation and profibrotic gene expression, were equivalent through day 7 in these two models. However, in the IRI/CL-NX model, macrophage numbers declined after day 7 with tubule regeneration and only modest interstitial fibrosis on day 30. In contrast, macrophages persisted and expressed significantly higher levels of profibrotic growth factors Pdgfb and Tgfb1, while dendritic cells and T cells significantly increased in numbers and expressed greater amounts of Tnfa and Il1b.