Adipose Tissue and Modulation of Hypertension

Session: Linking lifestyle, BP, and kidney diseases: What is the evidence? 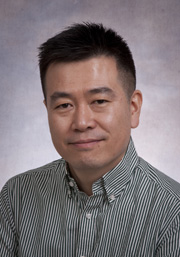 Dr. Hoon Ki SungIntermittent fasting (IF) is currently a popular new “diet trend,” especially among well-known Hollywood stars, like Jennifer Anniston. But what does the research have to say about it, specifically, its effect on reducing obesity? And, what other health benefits might it offer?

Hoon-Ki Sung, MD, PhD, from the Hospital for Sick Children Research Institute, presented his insights and research-backed studies regarding the above questions.

IF focuses less on “what” food is being consumed and more on “when” (how often) food is consumed.

According to a smartphone app, “erratic diurnal eating patterns in humans can be modulated for health benefits.”

For 16 weeks, a group of overweight, but otherwise healthy individuals, were placed on an eating duration of less than 14 hrs. These adults ate within a self-selected 10-12 hrs every day with no recommendations on nutrition or calories. The results? Improved sleep AND weight loss.

However, in mice that were given the same amount of calories and regardless of how high-fat the foods were, those in the IF group lost weight and mice in the non-IF group gained weight. Furthermore, when looking at body composition among the mice, IF mice were leaner than the non-IF mice who experienced more fat storage.

The browning of brown adipose with IF

Brown/beige adipose takes up less energy storage than white adipose. It was observed that IF leads to the browning of adipose, resulting in a leaner physique.

But what about other health benefits? Well, according to the research, IF improves glucose clearance through increased insulin production. According to Dr. Sung’s research, in patients with metabolic syndrome, the potential implication of IF on the CV system is that it promotes weight loss and lowers blood pressure.


Dr. Sung concludes with a visual graphic show that IF changes the “aged and fibrotic fat” to “healthy young fat”, even when on a high-cal diet, and just a high-cal diet without IF leads to the “aging and greater production of unhealthy fat.”