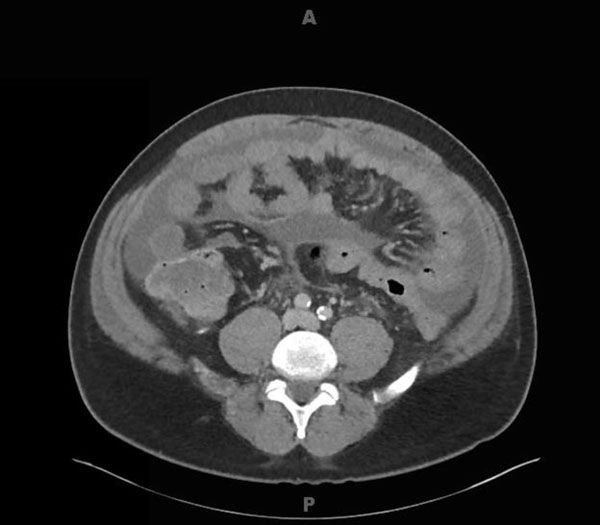 A 47-year-old African American male with end stage renal disease secondary to Thrombotic Thrombocytopenic Purpura, on peritoneal dialysis (PD) since 2006 presented in 2015 with abdominal pain and cloudy PD effluent bags due to PD peritonitis (PDP). He was a High-Average transporter and in 2007 had one episode of coagulase-negative staphylococcus PDP which resolved with antibiotics. During this admission, in view of his poor response to antibiotics and worsening clinical symptomatology, his PD catheter was removed. A computerized tomography scan (Fig. 1) raised suspicion of encapsulating peritoneal sclerosis, and in view of persistent symptoms of bowel obstruction, he was put forward for peritonectomy and enterolysis.

A longitudinal midline incision was made and the cocoon was carefully separated from the anterior abdominal wall (Fig. 2a). The peritoneum had a dense peritoneal rind that was evident. Next, starting inferiorly, bowel loops were separated from the overlying inflammatory rind inch-by-inch. No enterotomies were made during the procedure. The bowel had a very unusual appearance, which appeared to be ruddy and leathery with grooves and a golden luminescent-type appearance under the light. The dense capsule was carefully taken down and bowel was freed up from the ileocecal valve to the ligament of Treitz (Fig. 2b). The dense adhesions to the liver were carefully separated. The abdominal fascia was closed and the patient tolerated the procedure well.

Even with the advances in surgical techniques for advanced EPS, the post-operative mortality ranges between 19-35% [1]. especially in those who present as surgical emergencies. The recurrence rates post-surgery have been reported as high as 25% [2, 3]. Despite the good outcome in our patient, PD patients, especially with high transporter status who choose to remain on peritoneal dialysis for more than 5 years, need to be counselled on this devastating complication of peritoneal dialysis.