Empagliflozin and renal outcomes: further insights in to the renal protection of SGLT2 inhibitors

As we continue to process data from the EMPA-REG renal outcomes presentation - which most importantly showed a 46% reduction in the composite of creatinine doubling, end-stage renal disease or renal death - speculation is well underway to explain the mechanism for renal protection. And the emerging story appears to be quite fascinating indeed.

Early studies with SGLT2 inhibitors showed a modest reduction in GFR versus placebo which occurred early in the course of treatment and which gradually returned towards baseline and to that of placebo levels by the end of the relatively short follow-up period: 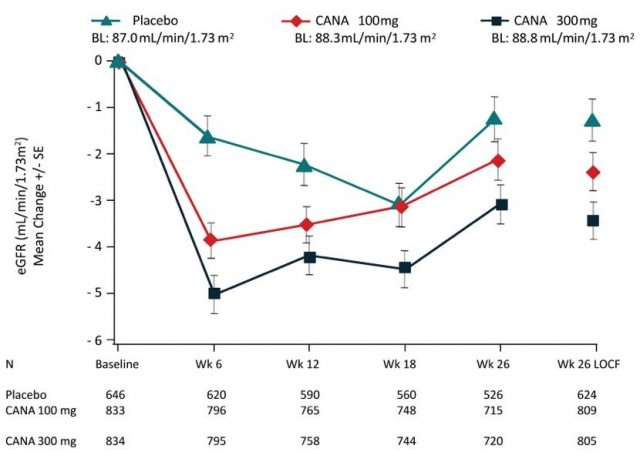 In the graph above, canagliflozin caused an obvious drop in GFR (relative to placebo and baseline) within 6-12 weeks after the drug was initiated, and the GFR promptly returned towards baseline by week 26. Based on these data alone, and based solely on GFR, one might wonder whether there is a modest element of renal harm from SGLT2 inhibition, balanced by many other positive benefits such as A1C improvement, weight loss and improved blood pressure. However, as EMPA-REG renal data emerge, we are learning a more interesting and promising story altogether. In EMPA-REG, GFR promptly fell within the same time frame as in the above study. However, EMPA-REG was a longer, higher-powered study and so we can observe the GFR changes for a meaningful period after the initial 6-12 weeks: 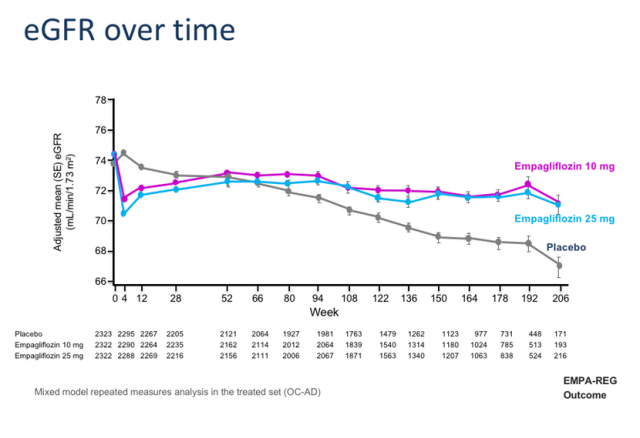 It is striking how similar the GFR curves appear in both studies up to the 12 week mark. In EMPA-REG, renal function dropped initially below baseline and that of the placebo group. However, at about the same point where earlier studies terminated, renal function plateaued over the remainder of the longer-term EMPA-REG study. At the same time, renal function in the placebo group fell as part of the natural history of diabetic kidney disease, suggesting an important renal protection mechanism of SGLT2 inhibitors. If you feel we have seen this before, we have - with ACE inhibitors and ARBs in diabetic nephropathy.

Diabetic nephropathy is, in part, a disease of glomerular hypertension and barotrauma. Early in the course of diabetic nephropathy, glomerular hypertension leads to increased filtration pressure and lower serum creatinine than in those without glomerular hypertension. Natural history studies have shown that patients who experience hyperfiltration and the deceptive appearance of a 'hyperfunctioning' kidney are those most at risk of progressive renal failure, owing to the impact of barotrauma on the health of the glomerulus. ACE/ARBs purposely reduce intraglomerular pressure via relative afferent arteriole constriction, reducing renal function - and barotrauma - in the short term but prolonging renal survival in the long run.

Are we seeing this exact mechanism with SGLT2 inhibitors? Prior to EMPA-REG, there was ample human and animal evidence for the reduction in glomerular hypertension by SGLT2 inhibitors [1,2,3]. And now, following the presentation of the remarkable renal outcomes in EMPA-REG, we may now have affirmed the hypothesis established by investigators in this area. The mechanism by which SGLT2 inhibitors reduce glomerular hyperfiltration is not fully understood but might relate to the effect of these drugs on tubular-glomerular feedback (more on this in a coming presentation on UKidney).

Long-term studies are currently underway with renal outcomes as their primary focus (e.g. CREDENCE with canagliflozin), but in the meantime, the renal protection story of SGLT2 inhibitors is already apparent and we should be aggressively expanding our use of these medications in patients with diabetes. There is inevitably going to be discussion about the applicability of these results to patients other than those in EMPA-REG and this is a vital step before incorporating these drugs in to clinical practice. Currently, by the regulatory labels for SGLT2 inhibitor class, these drugs are limited to patients with relatively in-tact renal function. And while this may be true for the use of these drugs as antihyperglyemics, their role as reno-protective drugs might extend to those with impaired renal function (even below 45 ml/min), since single nephron GFR in surviving nephrons is elevated and might indeed benefit from reduction in the same way as those with higher renal function. To that end, the CREDENCE study is enrolling patients with GFR as low as 30 ml/min. Clearly, there is much still to learn but these are exciting times indeed for the management of diabetic kidney disease.

Racing to apply the SPRINT study to your practice?...
Renal outcomes with Empagliflozin: a game-changer