SGLT2 inhibitors and nephroprotection: a perspective on the renal outcome data 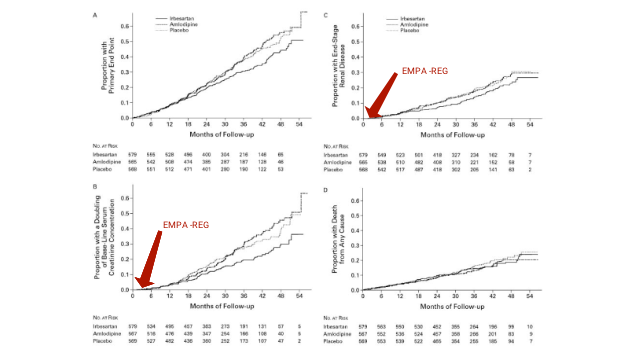 A long awaited analysis of the renal outcomes from the EMPA-REG study was published in the New England Journal of Medicine on June 14th [2].  As originally reported on UKidney, compared to patients taking placebo, the use of empagliflozin was associated with significant improvements in important renal end-points, namely doubling of serum creatinine and end-stage renal disease (ESRD). While these results are indeed very promising, some perspective is warranted when considering the potential nephroprotective properties of this drug, and of the SGLT2 inhibitor class in general.

The key findings as they appeared in the paper are:

Relative risk reductions of 44% and 55% are indeed striking however, the absolute differences were only 1.1% and 0.3% respectively. These differences amount to a number needed to treat (NNT) of 91 and 333. This effect stands in stark contrast to the IDNT study where irbesartan led to a more modest relative risk of reduction for doubling of creatinine and ESRD (33% and 23% respectively) but NNTs of only 12 and 24 [3]. This difference was clearly related to the higher risk for renal progression at baseline for IDNT compared to EMPA-REG where patients had twice the renal function and less proteinuria.

Some might argue that this analysis is less relevant considering the cardiovascular outcomes in EMPA-REG were also improved [1] and therefore any additional end-organ protection is a bonus, but specific renal outcome studies such as CREDENCE and DISTINCT-RENAL will be able to answer the question more definitely whether SGLT2 inhibitors are nephroprotective with significant clinical magnitude and importance, especially in a population at high risk for progression.

More positive news for Tolvaptan (Jinarc) in ADPKD...
Racing to apply the SPRINT study to your practice?...