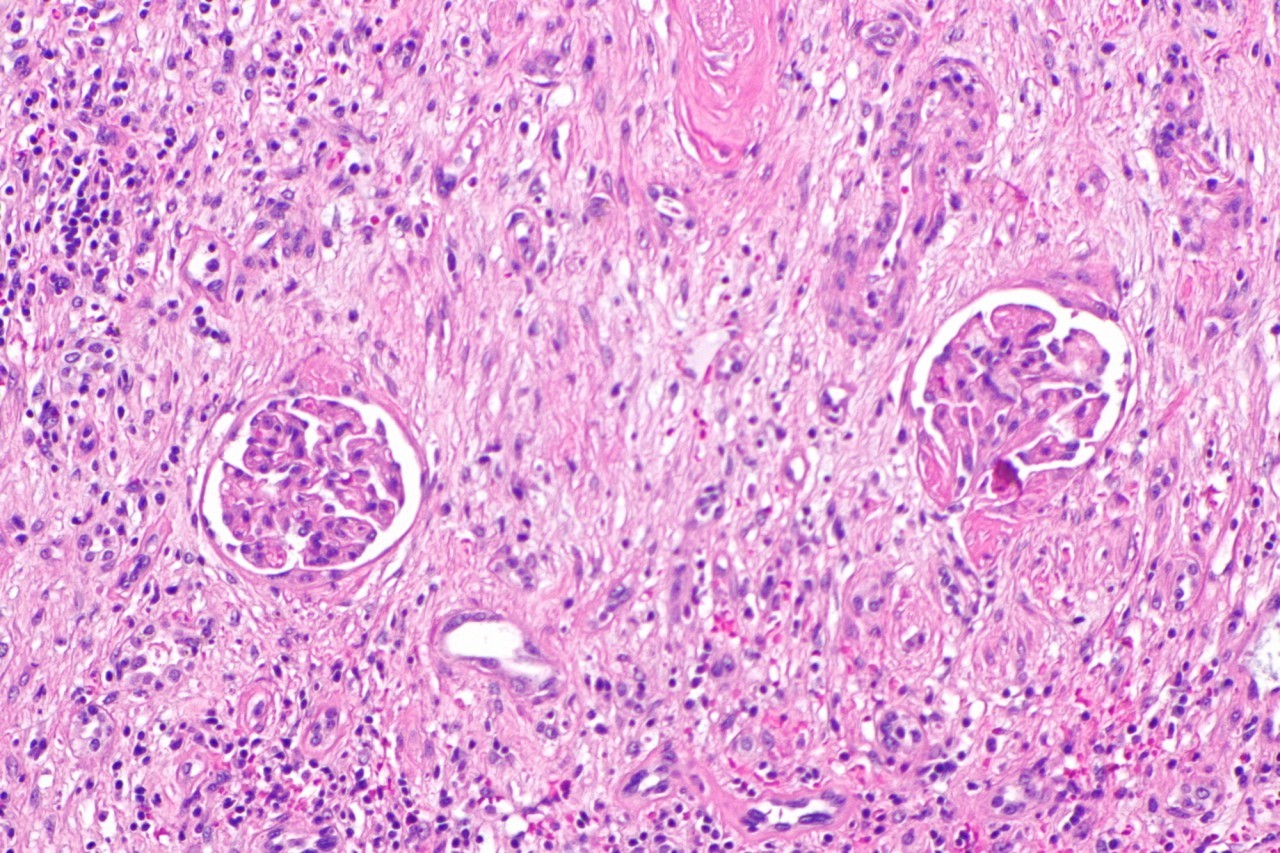 Drs. Anish Kirpalani and Darren Yuen, both of St. Michael's Hospital in Toronto, appear to be on the verge of a major practice-changing advance in the assessment of chronic kidney disease. Their study, appearing in cJASN, describes the new methodology which assesses kidney fibrosis in a novel way using MRI. We caught up with the authors of this exciting study and they shared some further perspective on their exciting findings.

What were the major findings of your study?

We tested a new MRI technique called MR elastography in a group of kidney transplant patients. Our goal was to see whether MR elastography could accurately measure whole allograft fibrotic burden when compared with histologic analysis of a contemporaneous kidney biopsy. We found that MR elastography did predict the degree of scarring in the kidney (see figure 1). We also found that our MR elastography fibrosis score predicted future change in eGFR, with more fibrotic kidneys experiencing a greater loss of renal function over a 1 year period (see figure 2). Our results support the notion that the degree of fibrosis in a kidney allograft is extremely important in predicting future outcome.

How does this new MRI test work?

As organs scar, they stiffen. While we don’t typically think of this stiffening as relevant, we use this every day when we palpate for a cirrhotic liver. What we feel with our fingers is the hardened edge of the scarred liver. With our new MRI test, we are simulating this palpation by using a paddle on the skin surface that gently vibrates. The vibration waves travel through the skin and the underlying kidney.  A stiff, fibrotic kidney transmits these waves faster than a soft, healthy kidney. The MRI takes high resolution images of the kidney as it vibrates, measuring the micron level displacements that occur (see figure 3). Since we know how much vibration force is applied, and how much displacement occurs, we can calculate the stiffness of the kidney. This data is presented as a heat map, with red areas representing stiff parts of the kidney, and blue areas representing softer parts (see figure 4). Importantly, the MRI does not require gadolinium. This technique is very similar to FibroscanTM ultrasound technology that hepatologists use to measure liver fibrosis severity, although our MRI technique has the benefit of measuring the whole organ in 3D (rather than single points in 1D).

Why is it important that we have a new way to estimate renal fibrosis? Doesn’t it reflect irreversible damage?

Fibrosis does represent irreversible damage. When assessing someone with renal dysfunction, we are always trying to determine how much of this dysfunction is due to irreversible fibrosis, and how much of it is reversible (eg. due to inflammation). We typically do this via indirect means: “what was the serum creatinine a year ago?” and “what are the size of the kidneys on ultrasound?” are common questions that are asked. Neither, however, directly measures fibrotic burden. In some (but not all) cases, a renal biopsy is performed, and this biopsy will provide information on how much scarring is present. However, fibrosis is patchy, so there is a definite risk of sampling bias (see figure 5). This new MRI test enables us to scan the entire kidney and provide an estimate of whole allograft fibrotic burden.

How do you think your findings could impact clinical practice?

With further validation, our hope is that MR elastography could be used to help estimate irreversible disease burden when a nephrologist is assessing a patient with renal dysfunction. A very stiff, fibrotic kidney would potentially: (1) suggest that little could be done to improve renal function, and (2) portend a poor renal prognosis. This information could help nephrologists in guiding decisions regarding therapy (eg. the use of potentially toxic immunotherapies) and prognosis (eg. planning for renal replacement therapy).

We also hope that MR elastography scans could potentially expedite the clinical testing of novel anti-fibrotic agents. Many new agents have good pre-clinical data, but are difficult to test in clinical trials because of the risks in performing serial biopsies in study subjects. By potentially providing a non-invasive way to assess whole kidney fibrotic burden, our hope is that MR elastography could enable the testing of these new agents in humans.

What are you plans going forward?

We initially tested whether MR elastography could measure fibrosis and predict outcomes in a very select group of patients (kidney transplant recipients undergoing a renal biopsy). Our next step will be to test whether this technology can predict outcomes in all renal transplant patients (including those not going for a biopsy). We have also adapted our MRI sequences so that they can now image native kidneys, and so we will also be testing this in patients with native CKD.

Finally, my co-principal investigator Dr. Anish Kirpalani and I would like to thank our colleagues in the Department of Medical Imaging and the Division of Nephrology at St. Michael’s Hospital. This work would not be possible without their unwavering support. 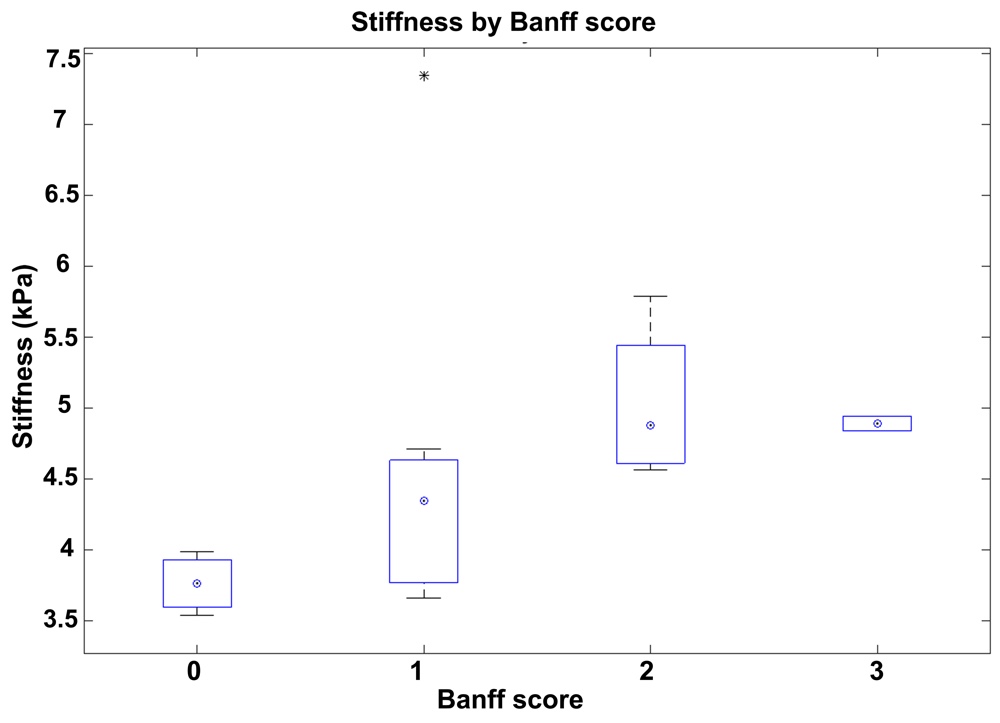 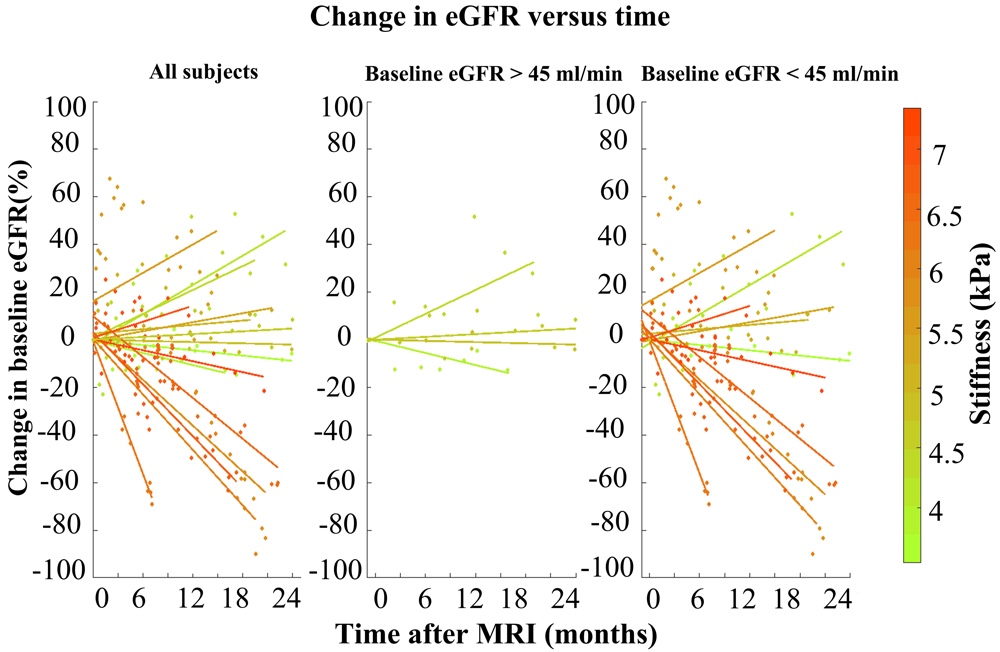 Figure 3: Principles of magnetic resonance elastography. In magnetic resonance elastography, a gentle vibrational wave is applied on the skin overlying the kidney using an acoustic generator. The magnetic resonance imaging scanner then images the small displacements produced by the resulting shear waves generated in the kidney. As the waves are longer and travel more rapidly through stiff tissue, kidney stiffness can be calculated based on the measured displacements and the amount of vibrational force applied. Post-imaging quantitative reconstruction enables the generation of “stiffness maps” (elastograms) of the imaged kidney. Displacement images are shown to the left and right of the scanner. Below each displacement image is the corresponding pseudo-colorized elastogram (stiffness map), with blue depicting softer, and red depicting stiffer tissue. Adapted from cJASN 2017, doi: 10.2215/CJN.01830217. 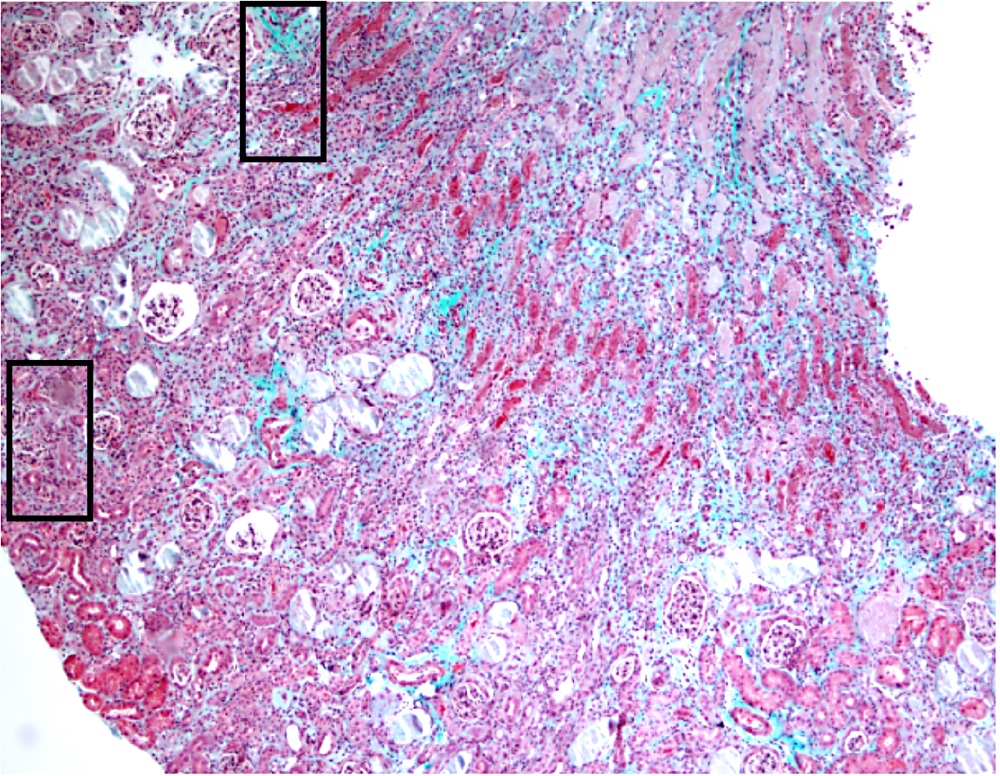 Figure 5: Since fibrosis is heterogeneously distributed throughout the kidney, a kidney biopsy is subject to potential sampling bias. Shown is a mouse kidney stained with Masson’s Trichrome, where scar tissue is stained light blue. The black rectangles demonstrate hypothetical kidney biopsy samples, illustrating how different samples can lead to very different estimates of scar burden.