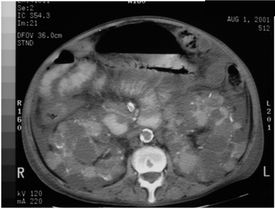 This week in the New England Journal of Medicine, 2 studies reported on the use of mTor inhibitors in Autosomal Dominant Polycystic Kidney Disease (ADPKD). The results were mixed but overall, disappointing.

In the first study, investigators used open label sirolimus versus standard care in 100 patients with ADPKD and mean GFR of 70 ml / min, (stage 2 chronic kidney disease). After 18 months, there was no difference in kidney volume nor kidney function between the 2 groups while the sirolimus group had higher urinary albumin excretion.

In the second study, a 2-year, double-blind trial, 433 patients were randomly assigned to receive placebo versus everolimus. After 24 months there was less kidney volume but the mean decrement in the estimated glomerular filtration rate after 24 months was the same: 8.9 ml per minute per 1.73 m2 of body-surface area in the everolimus group versus 7.7 ml per minute in the placebo group (P=0.15). There were more side effects in the treatment group.

I had been awaiting these studies with great anticipation but the results over-all are disappointing, namely because renal function was no better in the treatment groups. It is not clear how to explain the disconnect between reduction in cyst growth in the everolimus group yet no change in kidney function. There is little doubt that cyst volume is a less important outcome than renal function, however, it is hoped that with longer term studies, possibly earlier in the course of the disease, that the sustained control of cyst growth by everolimus could lead to preservation of renal function. I hope to see such longer term studies done in this fashion.